Do you already use your laptop as your main productivity tool?
Are you thinking of making a laptop your main productivity tool?
This blog could provide indispensible laptop tips n'trick for you if you answered yes to either of the above questions.
Many of these tips n'tricks could apply equally to PC workstations.
If you would like to start a discussion on any of the items posted, or associated subjects, please use the "Comments" at the end of each blog post.

Click on these buttons wherever you see them in the blog posts, if you would like to share your likes/dislikes regarding this site with social network information sharing schemes (e.g., StumbleUpon, Digg).

This single tip has probably saved me from hundreds of hours of recovery work and annoyance, over the years - avoidable work and annoyance that I still see a lot of people labouring under today. The tip is about changing the function of the CapsLock key. I used to do that with a Zif-Davis program called KEYMAP ZD v1.0 (which worked in Windows 98 but not in Windows post that). For Windows XP I use Microsoft remapkey.exe.
I mention it now because, today, I was perusing one of my favourite sites - Donation Coder.com - and reviewing the subsite:
1-hour software by Skrommel - (IMHO well worth a read).
Of the mountain of free and useful software there, there were these two:

Whilst these could both be really useful software, they (and lots of other ways of remapping keys) are made largely redundant, because of remapkey.exe - arguably the best and simplest way to remap the CapsLock key (or almost any other key). It is a free utility from Microsoft, available as a tool within the Windows Server 2003 Resource Kit Tools. That is a file of dozens of useful uber-geek tools, and they work with Windows 2000, Windows XP, Windows Server 2003, and Windows Vista.
If you are not a geek, and/or just want the remapping tool rather than the whole toolset, then you can get it here: remapkey.exe (click on link to download). When you have downloaded this file, double click it, and you will be presented with two keyboard maps (see image of my keyboard map below) of the  101-key keyboard. 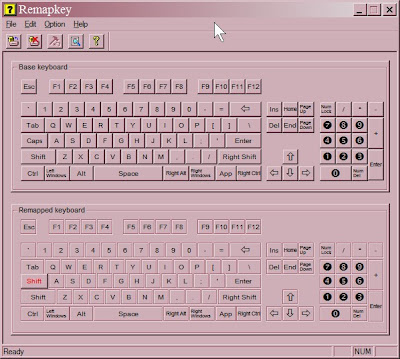 Use these to change CapsLock to Shift. Drag and drop the Shift key from the upper keyboard, onto the CapsLock key on the lower keyboard - notice that it now shows as a red Shift key. You can can remap other keys too, if they are configured on the 101-key keyboard. Once you have remapped the keys, save it and forget it - it makes a registry fix. There is no need to run remapkey.exe again, unless you want to remap some other keys.
If you need a more detailed step-by-step guide for using this utility, then you can find a good one at TechRepublic, here.